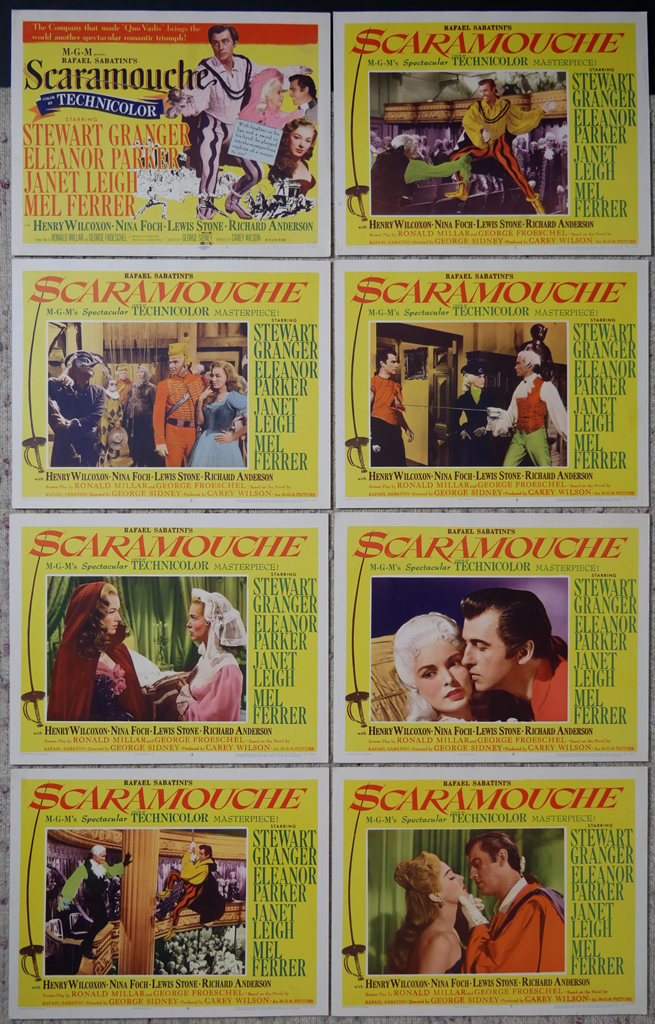 Set in 18th C France, just prior to the French Revolution, a master swordsman disguises himself as the clown Scaramouche to gain access to the royal court and avenge the death of his best friend. A Hollywood classic swashbuckler with lush costumes and sets, romantic capers, much humour and famous for a spectacular swordfight. Released 8 May, 1952 in New York.

Near Mint - with bright colours and clean overall appearance with no pinholes, evidence of light handling, no stains, minor areas of edgewear and mild age-related toning AND #1 has dent upper left margin which extends 1 inch into image and small dark smudge in upper right of image

Set of 8 Lobby Cards, each is numbered 1 through 8.
TITLE CARD 1- TAGLINE: With laughter on his lips and a sword in his hand, he plunged into the most perilous exploits of a romantic era!
- RED BANNER AT TOP: The Company that made "Quo Vadis" brings the world another spectacular romantic triumph!
TEXT/CREDITS IN IMAGE: M-G-M presents Rafael Sabatini's SCARAMOUCHE Color by Technicolor Starring Stewart Granger, Eleanor Parker, Janet Leigh, Mel Ferrer with Henry Wilcoxin, Nina Foch, Lewis Stone, Richard Anderson Screen Play by Ronald Millar and George Froeschel Based on the Title Card. Novel by Rafael Sabatini Directed by George Sidney Produced by Carey Wilson An M-G-M Picture
TITLE CARDS 2 through 8 - HEADER ABOVE IMAGE: Rafael Sabatini's SCARAMOUCHE M-G-M's Spectacular Color by Technicolor Masterpiece! TEXT/CREDITS are printed at right of image

BOTTOM MARGIN UNDER IMAGE: Copyright 1952 Loew's Incorporated Country of Origin U.S.A. Property of National Screen Service Corp. Licensed for display only in connection with the exhibition of this picture at your theatre. Must be returned immediately thereafter. 52/203